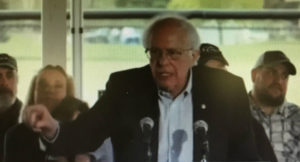 Vermont Senator Bernie Sanders pitched — both figuratively and literally — for his campaign team at the “Field of Dreams” last night.

The game was played on the iconic baseball field featured in the 1989 movie. Sanders’ squad lost 14-8 to a team mostly made up of players from a Cedar Rapids-based nonprofit that promotes youth sports, plus a few members of the Iowa news media. Earlier Monday, Sanders held a town hall meeting in Davenport. He also met with supporters in West Branch.

Sanders, an independent who is making a second bid for the Democratic Party’s presidential nomination, used a football analogy after listing his campaign objectives. “Now we have to take our struggle to fruition,” Sanders said. “We made a good start and now we’ve got to take that ball over the goal line.”

Massachusetts Senator Elizabeth Warren, Sanders’ main competitor for support from the progressive wing of the Democratic Party, was a registered Republican in the mid-1990s. Warren announced early this year that she would not attend big-ticket fundraisers or hire a polling firm and would, instead, invest campaign funds in staff. Warren has the largest campaign team in Iowa.