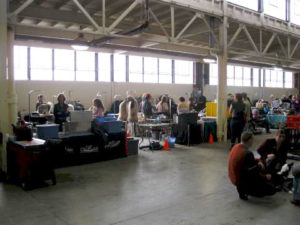 Inside the 4-H building.

The 2019 Iowa State Fair ended Sunday and on Monday, the $14 million renovation of an 80-year-old building on the fairgrounds began. Dave Hoffman of Le Mars, president of the Iowa State Fair Board, says the 4-H building is critical to the fair’s success.

“4-H and FFA are such an important part of the fair, you know, without them, without the support of all of Iowa’s 99 counties, we’d be just another carnival,” Hoffman says.

The building will be expanded to the east and west. The stone work on the outside and rows of so-called “clerestory” windows that are above eye level will be preserved. The project, which includes updating the inside of the building, will not be completed before next year’s fair, but Hoffman says the building will be usable. A special recognition ceremony is being planned for next August.

Richard Jacobson, the late Des Moines philanthropist, directed that his foundation dedicate $6 million to the project, plus another $4 million for ongoing maintenance. A private donor has written a half million dollar check, plus $5 million in state tax dollars will be spent to upgrade and expand the building.

The 4-H Building on the fairgrounds opened in 1939.