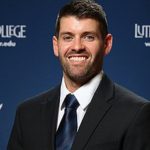 Luther College football coach Caleb Padilla says improvement this season begins by winning the close games. The Norse finished 1-9 in Padilla’s first season as head coach and four of the losses were by 10 points or less.

Added experience will help. The Norse return 12 starters from a year ago, including quarterback Ian Kuykendall . The senior passed for more than 1,400 yards and rushed for more than 900 as a junior. He leads an offense that Padilla says will have a better identity this season.

“It is such an important position”, added Padilla. “When you have got someone there who has been through it and done it you know it feels like an advantage over some of the teams who are sitting around and trying to figure out who is going to be the guy for them.”

Luther opens at Whittier College of California on September seventh.

(By Darin Svenson at KDEC, Decorah)