You are here: Home / News / Strong storms blow over semis, knock out power 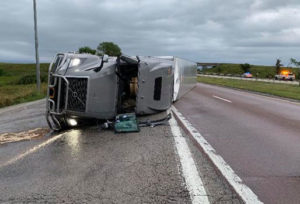 A semi blown over by high winds.

Severe weather rumbled across much of Iowa this morning, knocking out power to more than 20,000 homes and dumping more than four inches of rain on communities like Eagle Grove, causing flash flooding.

At least one house in the Des Moines area was set on fire by a lightning strike and meteorologist Andrew Ansorge, at the National Weather Service, says the winds were exceptionally strong.

“At this point, we know of at least two confirmed tornadoes, one near Badger Creek State Park and also another one down by Lacona and we’re looking at possible (tornado) damage out towards the Casey area,” Ansorge says. “We’re still gathering information from our emergency management partners and assessing the reports so far.” 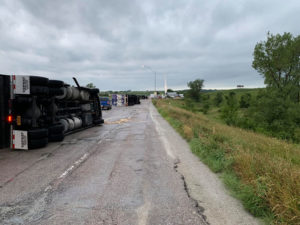 Semis blown over on I-80 near Adair.

That damage near Casey may have been straight line winds, he says. At least four semis were blown onto their sides along Interstate 80 nearby in the Adair area. Several of the truck drivers were hurt. There are multiple reports of trees, homes and other buildings being ravaged by winds and the twisters.

“We know of damage on the ground from our emergency management and law enforcement partners,” Ansorge says. “We don’t know the extent or how badly damaged things are at this time. I haven’t had the chance to look at damage photos, but I know there was damage on the ground in both of those areas.”

With the excessive downpours, some streets, parking lots and backyards were flooded in central Iowa. “Overall, we haven’t heard too many reports of flash flooding, which is a good thing,” Ansorge says. “We’ve been recently dry, so that kinda’ helped the ground set the stage for us to be able to take all of this moisture that came down really quickly this morning.”

Another semi was blown over, blocking the bridge over Lake Red Rock in Marion County. The Algona area reported hail measuring one-and-a-half inches in diameter.

(Photos from the Iowa State Patrol)