You are here: Home / News / 15 candidates give 10-minute pitches at Iowa union convention 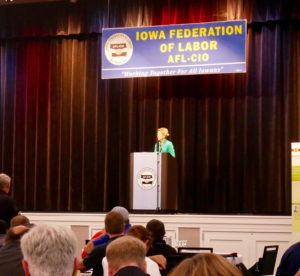 The president of the Iowa Federation of Labor AFL-CIO kicked off the union’s annual convention by saying elections have consequences, then welcoming 15 candidates seeking the Democratic Party’s presidential nomination to speak. Massachusetts

Senator Elizabeth Warren mentioned that her campaign staff is unionized and she’s helped others, like casino workers, join unions.

“If you’re looking for a partner in the White House, someone you can count on, then that’s who I will be,” she said.

New Jersey Senator Cory Booker said unions “are under attack” and that endangers the American dream and the middle class.

Former Vice President Joe Biden said union workers in the construction trades save corporations “tens of billions of dollars” because of their training. Biden also told the union crowd they’d never have a better friend in the White House.

“I promise you, if I’m elected your president, the collective bargaining right will be sacred in my administration,” Biden said.

Former Maryland Congressman John Delaney mentioned his father’s union membership and the union scholarship he got to go to college, then Delaney warned the group against choosing a candidate who takes the party too far to the left.

“Whenever we’re talking about a piece of policy, we say to ourselves: ‘What does this do for hardworking American? Does it help them or does it hurt them?’ And if it’s not going to help them, it probably shouldn’t be part of our platform,” Delaney said.

All but one of the candidates appeared in person. New York City Mayor Bill de Blasio had his flight to Iowa cancelled, so he appeared by video, but the audio hook-up distorted his voice.