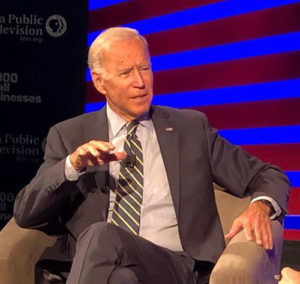 “We should not be exempting,” Biden said. “We should be insisting that these major oil companies, in fact, meet the criteria that is set.”

Trump has not commented on the new round of ethanol waivers, but Trump told reporters at the White House today that he is “the chosen one” to resolve trade issues with China. Biden said the president has taken the wrong path.

“The trade deficit wasn’t the problem. The problem was China’s stealing our intellectual property,” Biden said. “…The way to deal with that is not making the American farmer pay for that.”

Biden said tariffs won’t work and the better approach would be building an alliance of nations to build pressure on China to change its ways.

“Instead of beating up on our friends and coddling our enemies…we make up 25% of the world’s economy. We should get the other 35-40% of the world to join us in setting the rules of the road,” Biden said, “requiring China to have to engage in fair trade.”

Biden is appearing at a labor convention in Altoona early this afternoon.