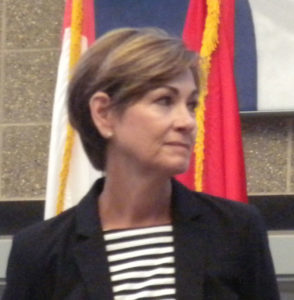 Governor Kim Reynolds was asked Tuesday about the mounting legal bill as state lawyers seek to have a verdict awarding a former labor commissioner $1.5-million dollars thrown out.

The discrimination case involved former Governor Terry Branstad — and Reynolds says the lawyer fees can’t be avoided. “It’s part of the process and we’re working with our legal counsel to decide what we do next. But, unfortunately that’s part of the litigation process,” Reynolds says.

The state is paying law firm Nyemaster Goode an additional $600,000 for its work defending former Governor Branstad, and the total payment to two private law firms is now $1.9 million in the past seven years. Reynolds defends using the private firms.

“We want to make sure we have the best representation for the state — because often times this sets precedents going forward,” according to Reynolds. “It’s unfortunate, it really is, but there is a cost.” Reynolds says they are reviewing all their options.
“We need to make sure that we agree with what’s come down — and if we don’t — there’s an opportunity to take it further, and that’s what we are deciding right now,” Reynolds says.

The jury found Branstad discriminated against Chris Godfrey in 2011 because he’s gay.