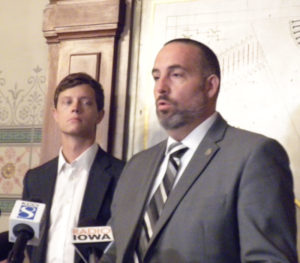 A report from the state auditor found an employee of the Department of Public Safety failed to conduct the required federal background checks for nearly 6,000 people who applied for a private investigator or security guard licenses.

State Auditor Rob Sand says the security companies apply to the state to get license known as a “guard card.”  “There’s first an Iowa background check and then a nationwide background check that’s supposed to be conducted prior to the individuals continuing their employment in those industries,” Sand says. A review from July of 2016 through August 15th, 2018 showed DPS clerk Joe Sheehan Junior did not do the federal background the checks.

DPS Commissioner Stephan Bayens says Sheehan was fired. “Once the Department of Public Safety discovered the conduct identified in the auditor’s report today –we took swift action to investigate and remedy what had occurred,” according to Bayens. “Within the first few days of discovering what this employee had done, the Department Of Public Safety contacted the state auditor’s office for assistance and immediately initiated and opened a parallel personnel investigation and criminal investigation.”

Bayens says they found 5,817 cases where the guard card was issued without a federal background check. “As of the present date we have resolved 90 percent of those permits in question — and anticipate resolving the remaining 10 percent in the next 60 to 75 days.

“Based on at least our investigation thus far — it did not appear that the individual was receiving some sort of tangible benefit for doing this. That’s the best information that we have. But I would not speculate further on what may motivate an individual to do these things,” Bayens says. He says the criminal investigation is continuing and did not say any charges had been filed. State Auditor Sands also says he did not find signs of benefit to the clerk. “Our investigation did not uncover any evidence suggesting that this employee was actually embezzling any money,” Sands says

. The auditor made several recommendations to DPS on safeguards to prevent this from happening again and Bayens says they are following through on those recommendations.