Jeeps in the historic convoy.

That military convoy you heard about last week on Radio Iowa is scheduled to reach the state today with much fanfare as it crosses the Mississippi River into Clinton.

Convoy commander Dan McCluskey says the string of about 60 Jeeps, trucks and other military vehicles is making a long cross-country trek from Washington D.C. to San Francisco. “We are retracing on this convoy the route that the U.S. Army did in 1919,” McCluskey says. “This was the very first motor vehicle convoy that the Army did. They were following the route of the Lincoln Highway which was being constructed at that time.” 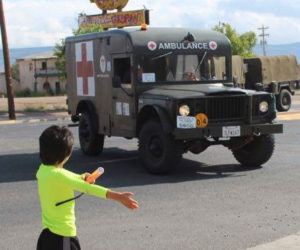 The famed highway enters Clinton at the North Bridge and travels along Highway 30 across Iowa. McCluskey says it’s fascinating following the original route from a century ago, visiting so many towns that were bypassed by the interstates.

“We notify all of these towns that we’re coming and they turn out,” he says. “As we drive through town, we get hundreds and hundreds of people. We’ll be out in the countryside and here’s people on an 80-acre farm and they’re sitting out in their chairs, waiting for the convoy to come by, waving flags and cheering us as we go by.”

McCluskey says there are all types of military vehicles from all eras, including a 1919 staff car.  “What we call this is our Parade across America,” he says. “It’s really giving us a feeling that the patriotism is still there. We’re saluting all of our servicemen, both past, present and future, and the vehicles that they drove.”

The convoy is scheduled to reach Clinton around 2 P.M. today with overnight stops planned in DeWitt, Marshalltown and Denison. Stops are also scheduled in: Lowden, Marion, Belle Plaine, the Tama Lincoln Highway Bridge, Nevada during the Lincoln Highway Days Parade, Boone, Jefferson, Woodbine and Missouri Valley or Crescent. The convoy should pass through Council Bluffs on Sunday.