You are here: Home / News / O’Rourke calls for mandatory buy-back of assault-style weapons 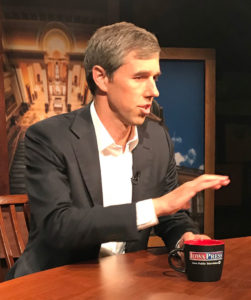 “It will not be a voluntary program, to be clear,” O’Rourke said today during taping of an upcoming Iowa Public Television “Iowa Press” episode. “It will be a mandatory buy-back program.”

Police say the gunman who killed 22 at a Walmart in O’Rourke’s hometown of El Paso in early August used an “AK-47-style rifle.”

“There are millions of them on the streets,” O’Rourke said, “and so I think we have to take that intellectually-honest, politically-difficult step of buying those weapons out of our lives and keeping them on the battlefield, not in our community.”

O’Rourke said gun violence is an epidemic and it’s time to have universal background checks for all gun sales and a licensing system for guns in addition to the mandatory buy-back of rapid-fire guns that O’Rourke calls “weapons of war.”

“The alternative is to accept as our fortune and our fate and our future the deaths of 40,000 Americans every year,” O’Rourke said.

O’Rourke is urging social media companies to crack down on violent rhetoric — and he says Americans need to “connect the dots” between President Trump’s rhetoric and acts of gun violence, like the shooting in El Paso.

“He is tearing apart an already divided country,” O’Rourke said, “and putting a target on the back of Hispanic Americans across this country.”

O’Rourke returned to the Iowa campaign trail this past Tuesday week and held a discussion about gun violence earlier today in the Iowa capitol.