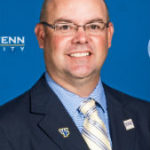 William Penn coach Todd Hafner says team chemistry is rarely associated with football but it was a factor in a disappointing 2018 season. The Statesmen stumbled to a 2-4 start, lost to four teams ranked in the top ten, and finished 4-7. It snapped a string of four straight seven win seasons for the program.

We were a little bit behind the eight ball”, said Hafner. “We did not play very good at times and our team chemistry wasn’t great. It gave us a lot of things to work on in the spring and so far this fall our team chemistry has been fantastic and I really think this team is headed in a good direction.”

Quarterback Tyler Wood was injured early in a season opening loss at Morningside and missed a couple of game in 2018. He returns for his senior season to direct Penn”s triple option offense.

“He is the type of kid that can make a small mistake and make up for it with his athletic ability,” added Hafner. “We have designed plays for him and hopefully he can stay healthy and carry us through.”

They will need to be good early in a challenging Heart of America Conference schedule that finds the Statesmen playing three ranked foes in their first four games. The opener against 18th ranked Evangel is August 31st in Oskaloosa.