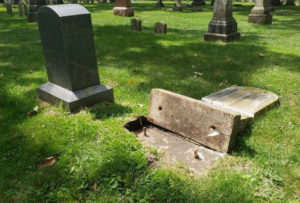 A headstone toppled at Oakland cemetery.

Donations are now being accepted for a northeast Iowa cemetery where vandals toppled more than two-dozen headstones last week.

Sara Breckenfelder is treasurer of the Manchester Cemetery Company which oversees Oakland Cemetery in the town of Manchester.   “There were 29 of them that had been knocked over,” Breckenfelder says. “Some of them were broken in half but those 29 were off of their foundations. We don’t know an exact cost to repair all of these headstones yet but we’re being told a preliminary estimate is around $20,000, maybe a little more.”

Breckenfelder says paying for the repairs to those damaged headstones won’t be easy.  “Since the tombstones are not owned by the cemetery, they’re actually owned by the families of the deceased who are buried there — they are the ones that purchased the headstones — so our insurance would not cover them at all,” Breckenfelder says. “Really, the responsibility lies with the headstone owner or their family.” 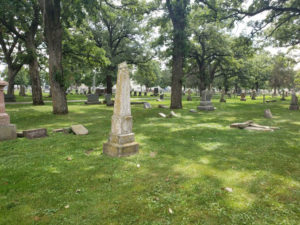 Local residents who are angry about the senseless vandalism have offered to make donations to help pay for the repairs – something Breckenfelder says is very much appreciated.  “So many of those headstones are quite old. Some date back to the 1800s,” Breckenfelder says. “There’s no living family members around here, so the cemetery would then absorb the cost of trying to repair everything but that is a significant amount for the cemetery to afford, especially on our very limited budget.”

Donations can be sent to the Manchester Cemetery Company at 1223 North Franklin Street in Manchester or to F&M Bank. No arrests were made.