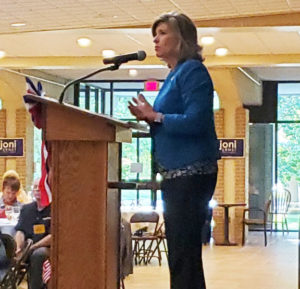 Iowa Senator Joni Ernst talked with President Trump twice on Thursday about EPA waivers to big oil companies that have reduced the amount of ethanol that must be blended into gasoline.

“Just so he understood exactly what the mood was here in the Midwest,” Ernst said last night. “And I said: ‘You know we’ve got a lot of work to do.'”

Ernst said Trump, as well as EPA administrator Andrew Wheeler, Ag Secretary Sonny Perdue, and other White House staff were on a conference call. They discussed a number of different options for farmers and those employed in the ethanol industry.

“It seemed to be a very upbeat conversation,” Ernst said. “But, again, he’s very concerned about the well-being of the farmers.”

The ethanol industry has been harshly critical of the latest round of ethanol waivers. POET Biorefining, which operates six plants in Iowa, has shut down its ethanol plant in Indiana and announced this week it is reducing production at others. Given the make-up of a key committee in the U.S. Senate, Ernst said last weekend that there’s little chance for a pro-ethanol bill to clear congress.  Last night, Ernst expressed optimism that the Trump Administration will come up with a solution.

“We certainly want to sift through the proposals that have been put forward by the administration,” Ernst said.