You are here: Home / Human Interest / DOT responds to demand for blackout plate with immediate sales of generic version 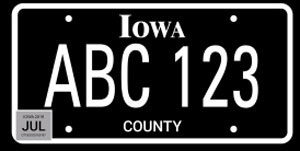 The Iowa Department of Transportation is going to start offering generic versions of the new blackout license plate next week at your county treasurer’s office to help meet the demand.

DOT spokesman, Daniel Yeh says the plate orders have been brisk and they’ve had 9.000 sold they began offering them July 1st. “The blackout plate is already number four on our list of specialty plates in Iowa. The University of Iowa plate has more than 31,000 circulating right now. Iowa State University is next with almost 20,000 — and then natural resources goldfinch plate is up near 17,000,” according to Yeh.

He says the demand for the blackout plates has gone beyond what they expected.  “It’s a little surprising I guess for me,” Yeh says, “we knew that a lot of people were interested in the blackout plate, because many of them had bought the Dordt University plate that has the similar color scheme, but has some additional letter. I guess we were a little surprised I guess maybe that we had this many in the first two months.”

The non-personalized plate has the same black background with white letters — but you have to take whatever numbers and letters are in the pipeline. “It really just depends what coming off the machine that day from Iowa Prison Industries. Right now we’re in the letter I,” Yeh says, “So, all of the newer plates that you are seeing out there are going to start with three letters — starting with the letter I — and then they’ll have three numbers. We’re already sort of late in the letter I’s. I think that I was seeing that we might be somewhere around the I-R or I-S series.”

Yeh says 95 percent of cars and trucks carry the standard issue non-personalized plate — but it is possible you could see one of the blackout plates anywhere you are driving in the state. “We’ve really seen these statewide. Every one of the 99 counties has distributed at least a few blackout plates. So, we think this is something that people around the state are interested in,” Yeh says. The standard blackout plates are considered a specialty plate and that means you will pay $35 fee to get one and then pay an additional ten dollars each year if you keep the blackout plate.

If you don’t mind the wait to get a personalized blackout plate — you can order one and there will be $60 initial fee. Renewing the personalized plate costs $15 every year.