You are here: Home / Fires/Accidents/Disasters / Hero pilot of Flight 232 crash in Sioux City has died 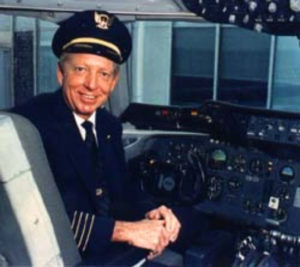 Captain Al Haynes, the pilot of United Airlines flight 232 — which crashed in Sioux City in 1989, has died at the age of 87.

Larry Finley, director of Sioux City’s Mid-American Air Museum, became friends with Haynes. Finley says Haynes loved Sioux City and the response he and the crew were given in the aftermath of the deadly crash.

“He made that comment many times in our conversations,” Finley says. “He said, ‘You know, I’ve been to a lot of communities but I really feel at home with the friendliness and the compassion of the people in Sioux City. I never knew anything about Sioux City until we made this unannounced approach to your airport.'”

The DC-10 had suffered complete hydraulic failure enroute from Denver to Chicago with 296 people on board. Haynes managed to guide the crippled airliner to Sioux Gateway Airport, where it crash landed as a fleet of ambulances and fire trucks waited at the scene. While 111 died in the fiery crash, 185 survived.

Finley says Haynes never considered himself a hero and deeply regretted the loss of life in the crash. “That’s one of the reasons that every year, subsequent to the crash, the crew had its own reunion,” Finley says. “Captain Haynes explained to me that it was therapeutic for all of them because they all felt that somewhere in the back of their mind, they were all responsible.”

Without the perseverance of the crew, the outcome could have ended in greater loss of life, as no domestic airliner had ever experienced that type of catastrophe before. “Captain Haynes said that was the reason they made it to Sioux City and it was as successful as it was because individually, the four people in the cockpit had never experienced total hydraulic failure on an aircraft like that,” Finley says. “He says it was everybody having input into the final solution.” With all hydraulics out, Haynes steered the plane by using the thrusters on the two remaining engines, one on each wing.