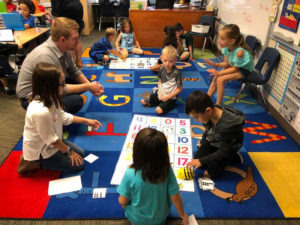 They’re each using a $50,000 grant through private or state funds to expand and incorporate computer science into everything from math to gym class. Staci Hupp, at the Iowa Department of Education, says computer science is seen as a basic skill in today’s economy.

Hupp says, “This is about preparing students, giving them the foundation so that if they’re interested in these types of jobs they can take advanced coursework and be prepared to really study this further.”

Jobs that use computer science include programming, web development and information technology. Carrie Rankin, with the Iowa Governor’s STEM Advisory Council, visited Sioux City’s Loess Hills Elementary School, which is the blueprint for the effort.
She says students seem to gain a lot of confidence from a computer science curriculum.

“In the fifth grade, we saw with social studies and how they were animating stories about settlers in our country and using technology to do that,” Rankin says. “It’s just incredible what these students are learning and at the pace that they are.” The advisory council says the schools can spend this year planning their programs or launch them right away. Schools will report to the council throughout the year on how their programs are working.

(Thanks to Katie Peikes, Iowa Public Radio for story and photo)