You are here: Home / Agriculture / Iowa apple crop catches up after late start 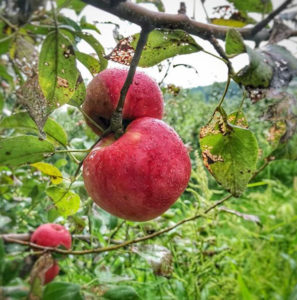 An apple grower in eastern Iowa says the recent weather has helped the crop catch up after a slow start.

Paul Rasch owns Wilson’s Orchard near Iowa City and says they normally start picking apples around July 4th — but that did not happen this year. “Around the midwest you are just hearing that with fruit in general — everything is somewhere between a week or two weeks behind — or it has been. It’s kind of like the skies kind of opened up as it were and all this heat we’ve gotten in the last two or three weeks has really brought stuff forward.”

He says cool weather slowed the process just when the trees were getting ready to produce the apples. “During bloom we had really cool, subnormal temperatures and a lot of rain. And that’s not usually a very good recipe for a good fruit set,” according to Rasch. “But for whatever reason this year flowers just stayed viable for a long, long time, for up to 20 days. Normally if they’re open five-to-seven says — that’s about it.”

Rasch says the longer bloom still made it possible for pollination. “The bees had time to work — they found little windows — because we set a really beautiful crop despite really wet conditions. The heat later on and the dry, the trees have really deep roots, and the ones that aren’t we have on irrigation. So, it hasn’t been that big a problem on the dry,” Rasch says.

He says the apples are ready to go and he wants people to try the Iowa-grown product. “Get off your duff and just come out and try ’em. We sample apples every day that we’re open, and we’re open every day of the week,” Rasch says. He grows more than 100 varieties and says that offers something for everyone’s taste.

“Not everybody is the same,” he says, “I like tart apples, my wife likes sweeter apples. It’s a personal thing.” Rasch says no matter what type of apple you like — getting them fresh from the tree at an Iowa grower is the best product. “It’s really important with apples, as with most fruit, to pick them when they’re ripe. Commercial fruit growing is based on sending apples to supermarkets that’ll store well, which means you have to pick them underripe,” Rasch says. “But you lose a lot of the flavor and even the nutritional value when you pick them that way. It’s really a different deal if you can come out to a place –whether your own orchard or ours — where you can pick them at the height of ripeness”.

He says the different varieties of trees have apples that mature throughout the fall, giving you the opportunity to experience different flavors. “It changes a lot — even in that last week of ripening — the flavors change immensely. You lose the starches, they go to sugar, a lot of the color develops and with it a lot of the nuanced flavor of these different apples,” Rasch says. Wilson’s Orchard allows you to pick your own apples or you can buy those that picked for you.

The orchard and its in-house bakery is open daily from through October 31st from 10 a.m. to 6 p.m. Rasch encourages you to find an orchard in your area where you can get fresh apples.

The Iowa Department of Agriculture has a directory of orchards in the state you can see here.