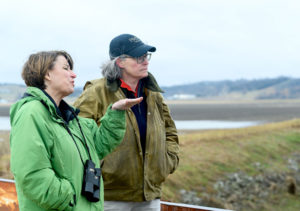 A woman who gave seven of the Democratic presidential candidates a tour of her flooded Pacific Junction home is endorsing Minnesota Senator Amy Klobuchar’s bid for the White House.

Fran Parr’s home sits more than two miles from the Missouri River, but it was swamped with nine feet of floodwaters in March.

“A big reason that I’m supporting the senator and the reason I’m stating this and the reason I’m continuing to be an advocate, I hope, for the folks of southwest Iowa is I’m genuinely concerned about mental health,” Parr told Radio Iowa this morning. “…It’s been a grind and people are getting tired. They’re frustrated. Frankly, they don’t even know what options they have on the table in front of them.”

Parr said she likes Klobuchar’s plan to improve access to mental health services. Parr described Klobuchar as “logical and pragmatic” rather than “flashy” — and Parr said Klobuchar’s bipartisan work in the U.S. Senate shows how her “Midwest voice” is important.

“Honestly, I don’t vote party line,” Parr said. “I vote for whoever — I’m sure you’re heard it before — for whoever is the right candidate.”

Parr and her family have not been able to move back into their home — and she doesn’t yet know when or if that’s possible.

“Basically what we’ve done is stripped it down and stabilized it. We have fans going in there, tried to do some mold suppression. Everything’s down to studs,” Parr said. “Kind of pending some decision points by the county and state, we’re trying to figure out what our next move is here — so we’re in suspended decision-mode here.”

Klobuchar was the first candidate to visit Parr’s flood-ravaged home. In late June, Parr was Klobuchar’s guest in the audience for the first televised debate in Miami among the presidential candidates.

(Photo courtesy of the Klobuchar campaign)