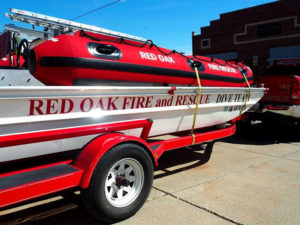 The Fremont County Sheriff’s Office says an unoccupied boat was located approximately a mile downstream from the river’s Goldenrod Boat Access east of Hamburg. Captain Brian Smith of the Iowa Department of Natural Resources says the ramp is their starting point for the search.

“Right now we’re focusing our efforts primarily within a couple hundred yards of the boat ramp, itself,” Smith says. “The Southwest Iowa Dive Team did search around the ramp, but faced some issues with the conditions in the water. “My understanding is that they searched out as far as could until the current got too strong for divers to maintain their position.” Smith says search efforts are expected to continue through the evening hours.

The missing boater’s name has not been released, out of respect for family members.

The search has been suspended for a missing boater in southwest Iowa.

The Fremont County Sheriff’s Office was contacted shortly after 5 p.m. Monday regarding a missing boater at the Goldenrod Boat Access to the West Nishnabotna River, located at the intersection of Highways 275 and 333, east of Hamburg. Authorities say an unoccupied boat was located approximately a mile downstream from the boat access.

The search for the missing boater was called off at around 10:30 p.m. Authorities say the boater has not been found. The boater’s name is not being released at this time, pending notification of family members. The sheriff’s office says further information will be released as it becomes available.