You are here: Home / Agriculture / Grassley and Vilsack meet up to tout USMCA ratification 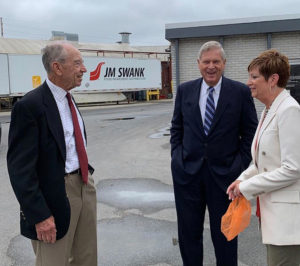 Two prominent politicians from opposing parties held an event Monday to call for approval of the U.S. Mexico Canada Agreement. The new deal would replace the North American Free Trade Agreement, updating some provisions and changing others.

“When everybody thinks everything in Washington is partisan and there’s an opportunity to stress bipartisanship — and with somebody of Governor Vilsack’s background particularly as secretary of agriculture for eight years in the previous administration, it brings credibility,” Grassley told reporters.

Vilsack is now the president of the U.S. Dairy Export Council.

“It is the hope of the dairy industry and dairy farmers across the US that we get this ratified before the end of the year,” Vilsack said. “We don’t want this bleeding into 2020 and all the political ramifications of that year.”

Vilsack said trade tensions with China are an should be the “impetus” or incentive for getting the USMCA ratified.