You are here: Home / News / State vaccination rate for teens goes up 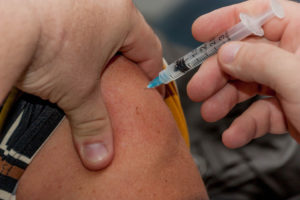 Vaccination rates in Iowa rose between 2017 and ’18, according to a new report from the Iowa Department of Public Health.

Don Callaghan, bureau chief of the state’s immunization program, says the vaccination rates for Iowa teens exceeded regional and national averages. “It’s definitely exciting to see the immunization rates coming up for adolescents in the state of Iowa, but we still have work to do in those areas,” Callaghan says. “We’re not at the national goal of 90% but we’re doing a lot better.”

Last year, Iowa’s the rate for the Tdap vaccine, which covers diphtheria, tetanus and whooping cough, rose to 94%. That’s up six-tenths of a point from the previous year and is more than five full points higher than the national average and well above the regional average of 86.6%.

The Iowa vaccine rates for HPV or human papillomavirus weren’t as stellar but are also improving. “HPV rates have been climbing over the years and we’re doing really well in that now, too,” Callaghan says. “Fifty-five percent for a completion rate doesn’t sound all that great but we’re definitely up and we’re moving in the right direction. It’s really health care providers that are working to get these immunization rates up and parents who are really seeking these immunizations to protect their children.”

Some parents don’t want their children vaccinated, which Callaghan says is an unfortunate choice for everyone involved. “Receiving immunizations not only protects the child but also protects the family and the community,” Callaghan says. “HPV vaccine is a cancer prevention vaccine so receiving HPV vaccine prevents you from contracting certain HPV-related cancers later on in life.”

He says vaccines have the ability to protect Iowans of all ages from serious and sometimes deadly infectious diseases. It’s state law for children to have certain vaccines before they’ll be allowed to attend public schools. “Adolescents, there are two vaccines that are required that are included in the national immunization survey,” Callaghan says. “That is the Tdap and the meningococcal vaccine. If you do not have those vaccines, you cannot get into school. In Iowa, we also allow for a medical or religious exemption. That would be another option if your child does not receive those vaccinations.”

The state is also doing well on its vaccinations for meningitis, which rose from 83.6% in 2017 to 89.2% in 2018 and was higher than the national (86.6%) and regional (80.9%) rates. Recent disease outbreaks across the country show that while vaccines are vital in preventing disease, he says many parents don’t use the life-saving tools to protect themselves, their families and their communities from preventable diseases.