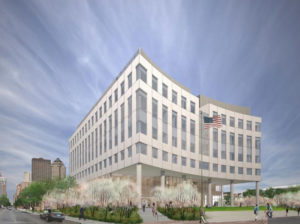 Ground was broken in downtown Des Moines today for a new $137 million federal courthouse on a vacant lot where the downtown YMCA once stood.

That location was criticized by some local officials who preferred it for private development. But Southern District chief judge, John Jarvey says the courthouse deserves a prominent place. “It’s location out of the flood plain. It’s environmentally clean. It’s on bus lines where people come to the federal court on buses. All these factors played into the decision and it wasn’t an easy decision but it’s an exceedingly important one,” Jarvey says.

The new courthouse will take three years to build and will rise six stories on the banks of the Des Moines River. The General Services Administration says the new location will improve security and disabled access to the courts. It will also save money spent on leased space next door to the current courthouse.

A host of local groups and officials opposed the decision to build it there — but Principal Financial CEO Daniel Houston endorsed the design, saying a glass entry on the main floor keeps the building open to the surrounding area. “Frankly, it’s incredibly inviting. So we’re very excited about what the GSA and the judges created in terms of a front door,” Houston says.

The current courthouse opened in 1929. Judge Jarvey says it hasn’t been decided what will happen to it. He says first priority goes to other government agencies before it’s made available for redevelopment.