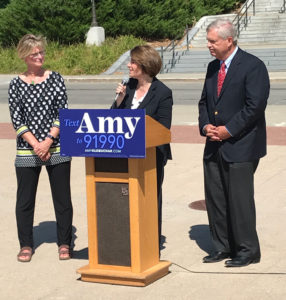 Democratic presidential candidates have been joining the chorus of complaints from ethanol backers upset by Trump Administration waivers for oil companies.

Minnesota Senator Amy Klobuchar held a news conference outside the Iowa Capitol yesterday, blasting the recently-awarded waivers so ethanol doesn’t have to be blended into gasoline produced in 31 U.S. refineries. Klobuchar said it’s a “gut punch” to the entire rural economy.

“It is not just an individual farmer out there in Iowa, it is entire communities and people that have invested in biofuels,” Klobuchar said.

Klobuchar said while farmers are facing the headwinds of a trade war and one of the most difficult growing seasons in recent memory, President Trump “caved” to the oil industry.

“He is literally treating these farmers like bargaining chips in one of his bankrupt casinos,” Klobuchar said. “…Whatever the reason, it’s bad for Iowa, it’s bad for the Midwest and it’s another example of him not keeping his promise.”

“It is really bad for our efforts to free ourselves from a dependence on fossil fuels,” O’Rourke told reporters after an event in Des Moines. “Farmers and producers here in Iowa have taken about 10% of the gasoline off the market and out of our tanks and the exhaust out of the air.”

O’Rourke said if he’s elected president, he would not grant ethanol waivers to oil companies. New Jersey Senator Cory Booker this week issued a statement saying Trump’s decision on the waivers has created “a moment of crisis” for farmers and biofuel producers.

Republican Governor Kim Reynolds yesterday told Iowa reporters that Trump didn’t realize the impact the waivers would have on ethanol demand, but Reynolds said now he does.