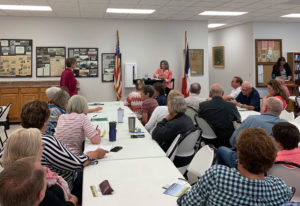 Iowa Senators Chuck Grassley and Joni Ernst are calling on the U.S. Army Corps of Engineers to keep its commitment to repair a key levee near Hamburg.

The Corps ordered that the levee be lowered eight feet following flooding in 2011 and residents say that’s one reason this year’s Missouri River flooding was so devastating. Ernst says there are indications the Corps is retreating from its earlier promise to rebuild what’s called the Ditch 6 levee.

“They made a commitment to bring that levee up to 919 feet and then they backed off of it,” Ernst says, “so we’ve got to do something about that and we’ll continue to push them.”

Ernst held a town hall meeting Wednesday in the small town of Riverton, which is in the far southwest corner of the state and fielded complaints about the Army Corps’ management of the river. Linda White of Hamburg told Ernst her family lost their farm to this spring’s flooding.

“Who does the Corps actually have to…answer to?” White asked. “It seems like to us common people that they don’t answer to anybody except for themselves.”

Ernst and Missouri Senator Josh Hawley are co-sponsoring a bill calling for the Corps to make flood control of the Missouri River its highest priority.

“The Corps will answer to whatever the congress directs, but understand even those of us along the Missouri River corridor have different ideas on what those priorities should be,” Ernst said, “so if we can’t all agree up and down the river system that flood control should be the priority, it’s not going to go anywhere.”

And Ernst warned that other representatives want protection for hydroelectricity and recreational projects along the river to be priorities.