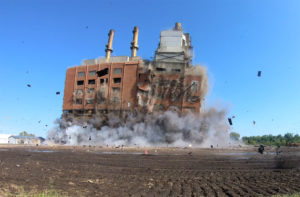 The former Alliant Energy coal-fired electric plant in Marshalltown is now a pile of rubble.

It took just seconds for the plant to crash down in a giant plume of smoke and dust after charges were set off.
Alliant Energy says companies from Michigan and Oklahoma set those charges around the remaining structures of the Sutherland Generating Station that was taken out of operation in 2017 when a natural gas fired plant went on-line.

The coal plant was built in the 1950s and at its peak could generate a total of 165 megawatts of electricity and employed more than 60 people.

Alliant reports that more than 99 percent of the materials from the imploded plant with either be reused on site or recycled.

See the implosion in this video provided by Alliant Energy: