You are here: Home / Sports / Reminder on sportsmanship issued as high school football gets underway 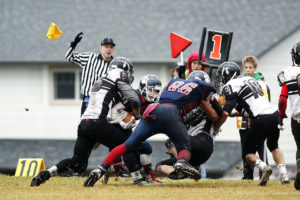 Parents, students and other fans are being reminded to behave responsibly as high school football season opens in Iowa with nearly 170 games tonight and tomorrow night.

Chris Cuellar, a spokesman for the Iowa High School Athletic Association, says there’s a high turnover rate for athletic directors, coaches and especially for game officials like referees.  “A lot of them cite aggressive fan behaviors or reactions as a reason why they’re stepping away,” Cuellar says. “It is tougher than ever to keep those younger officials around. No officials means no games.”

The Boone-based association is issuing guidelines for fans who are heading to the athletic events, with the first rule being: Act your age. “That’s a pretty direct message for adults,” Cuellar says. “The kids are the ones playing. Adults have to be the ones that act their age whether they’re in the stands or in the parking lot or watching or listening or wherever they’re at.”

The second guideline reminds parents not to live their lives vicariously through their kids. “The event is meant to be their activity, not yours,” Cuellar says. “The reason for doing it should be theirs, not yours. A lot of people can take that to heart as the seasons begin and they start to sign their kids up for things. It’s maybe a little tougher to remember when you’re in the heat of the game.”

There are about 80,000 boys taking part in Iowa high school sports every year and some parents put a great amount of pressure on their sons to win a college scholarship. Cuellar reminds, that’s not what participating in a school sport is supposed to be about.

“Only around 2% of all high school athletes, that’s all sports, that’s boys and girls and that’s all levels of NCAA, 2% are awarded some kind of college scholarship and the average value of that’s less than $20,000.” The main message he offers to sports fans is — be respectful and considerate.