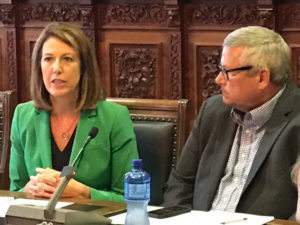 “I know there have been meetings and I know some of the things they have talked about, but I don’t know what’s going to be part of it and certainly we’re all on the edge of seat to be able to look at what it is,” Northey told reporters this afternoon. “I don’t even know the timing necessarily.”

This morning, Trump tweeted the ethanol waivers he okayed saved small oil refineries “from certain closing,” and Trump told farmers to “get ready” for a pro-ethanol move that will make them happy.

Northey spoke early this afternoon at a forum in the state capitol with Iowa Congresswoman Cindy Axne, a Democrat from Des Moines. Axne called the waivers “unacceptable.”

Axne is pressing for the inspector general in the EPA to investigate the ethanol waivers.

“The president can tweet out whatever he wants to tweet out about his next big thing,” Axne said. “…I am sick and tired of seeing hard-working farmers in Iowa being used as pawns in this administration whether it’s trade negotiation or whether it’s fulfilling the desires of rich shareholders of fossil fuel companies.”

Northey said farmers were excited about the prospects of year-round E15 sales, but that positive Trump Administration move “got lost” when the ethanol waivers were granted.  Plus, Northey mentioned the weather and market challenges farmers are facing

“There’s as much nervousness around the economics of agriculture as I’ve seen in quite a while,” Northey told reporters.

On Wednesday, Northey attended a forum in La Porte City with Iowa Congresswoman Abby Finkenauer, a Democrat from Dubuque. According to Iowa Starting Line, Finkenauer also criticized Trump, saying this is a “scary” time for agriculture.