You are here: Home / News / Ames ups the fines for illegal parking during Cyclone football games 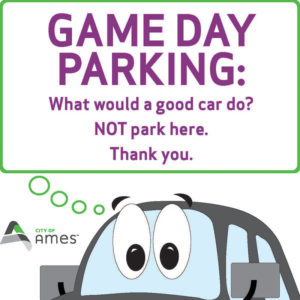 If you are heading to Ames for a football game this season — parking in the wrong place will cost you more money.

City parking enforcement coordinator, Sheri Nelson, says the city council approved the increase for certain areas on streets near the stadium. “On football game days any illegal parking violation that occurs in those zones will have an increased fine. The fine this year will be a $40 fine for any of those parking violations,”Nelson says.

The fine had been $20 and Nelson says the council felt that was not enough of a deterrent to prevent the illegal parking. “This became part of that expense when you are coming town to cheer on your team, I’ll just park here and pay the ticket and that’s just part of the cost I incur doing that,” Nelson says. “Hopefully the increase will just make people aware — maybe I don’t want to spend 40 dollars every time I come.”

Nelson says it becomes a big problem for some areas as the streets are not wide enough for cars to be parked on both sides of the street. “When cars and vehicles are parked on both sides of the street — it makes it very dangerous and very tight for lets say an emergency vehicle to get down,” according to Nelson. “There have been times when we’ve been enforcing out there that I’m worried about driving my little parking truck down the street — let alone an ambulance or fire truck,” Nelson says.

She says there have been a lot of other violations as cars try to pack into any space along the streets. “We see a lot of violations like sidewalks being blocked, driveways being blocked. A lot of people park to close to stop signs, in yellow zones. The list goes on and on as far as the different types of violations,” Nelson says.

There are 7 home games this season and the first test of the increased fines is this Saturday when the Cyclones host UNI. Nelson says they have done a lot to let people know the areas that are included in the game day fines. She says the public works department put up more than 500 signs that explain the game day parking ordinance and she says they’ve done a lot to try and educate everyone so they are ready for the game days.

Nelson says they have information on their website about the game day zones. She says there is plenty of parking available — but you have to walk farther sometimes. Nelson advises people to carpool to games or park further away and take a Cyride bus to the stadium.