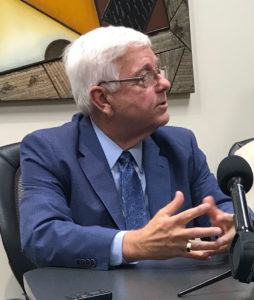 The former director of the Iowa Department of Human Services has filed a lawsuit seeking $2 million from the state of Iowa.

Jerry Foxhoven says he was forced to resign to prevent him from revealing information about a spending proposal he thought was illegal. The lawsuit names Governor Kim Reynolds as well as the governor’s chief of staff and legal counsel.

Foxhoven says he raised concerns about having his agency’s budget continue to cover the salary for someone who was working in the governor’s office. Foxhoven says he was fired before he could seek a legal opinion from the attorney general’s office.

Governor Reynolds says Foxhoven was asked to leave because she wants the agency to go in a new director. Reynolds has told reporters that Foxhoven never raised these spending concerns with her or her staff.

Foxhoven was the first agency administrator Reynolds hired when she took over as governor in mid-2017 and his last day as director was on June 17th of this year. Foxhoven’s lawsuit claims he was terminated “because he refused to engage in illegal activity.”

“As I have consistently shared with Iowans, many factors went into my decision to ask for Jerry Foxhoven’s resignation. My focus remains on the many Iowans that DHS serves, and I am committed to selecting a new director who will take this agency to the next level,” Reynolds said.