You are here: Home / Outdoors / Number of deer and Iowa counties hit by EHD has increased

A Department of Natural Resources expert says the outbreak of a virus in deer has expanded.

Tyler Harms has been following the outbreak of Epizootic Hemorrhagic Disease or EHD. “Total statewide number of reported deer is 583. And we are seeing a bit of an expansion in terms of space and scope. So we are see it reported in some additional counties in southern Iowa — and also some counties in eastern Iowa as well,” Harms says.

The total had been 400 deer, with the first reports of infected deer coming from Warren County. Harm says there are now reports from a total of 20 counties. “We know that that’s not the exact number of deer which are dying from EHD. We suspect there are very likely more deer on the landscape,” Harms says. “Although its challenging to know exactly what that number might be without some sort of standardized survey.”

The disease is spread through the bite of the female midge — and is not related to Chronic Wasting Disease.  “They are two very different diseases — both of which we monitor closely. Obviously CWD we monitor very closely with our surveillance program during the hunting seasons. EHD we rely on reports from out citizens as well as our field staff,” Harms says. 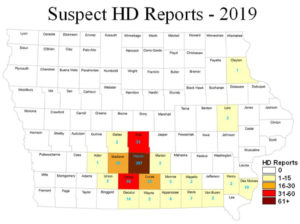 He says the threat to deer will last through the fall. “Once the midges die after the frost this year, the disease cycle is ended for this year,” Harms explains. “But it is a disease that we see in varying degrees in Iowa every year. We get reports of EHD in Iowa every year.”

He says you can still report deer that you find that have died from the disease. Infected deer are attracted to water to combat the fever and dehydration due to the hemorrhaging and usually die within a few days. “They die either laying in water or very near to water sources. So, if individuals are finding dead deer on their property that fit that criteria — we would a appreciate a report of that — because we do try to monitor this as closely as possible, ” Harms says.

Harms says they keep track of the number of cases of EHD as part of their effort to manage the size of the deer herd.