You are here: Home / News / Possible development along Mississippi River in Clinton 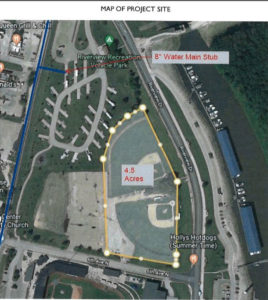 A four-and-a-half acre tract in a city park in Clinton along the western bank of the Mississippi River could be developed into an apartment and business area.

The Clinton City Council will hold a hearing September 10th to give the public a chance to comment on the first step in potential development in Clinton’s Riverview Park — specifically, hiring a firm to study the feasibility of the project.

“To look at building market-rate apartments, with commercial on the first floor,” said Matt Brooke, the City Administrator in Clinton.

City officials have been working with a firm that’s agreed to pay the city a thousand dollars for the right of first refusal on the project. The four-and-a-half acre tract is not in a flood zone, but the area area is designated as an “opportunity zone” in Clinton. That means the firm could apply for housing tax credits to help finance the housing and retail space.