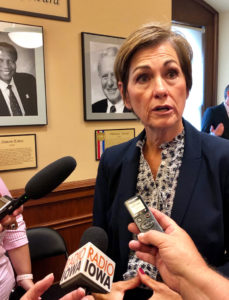 Task force member Larry Winum, a banker from Glenwood, said the city council in Pacific Junction is determined to save their town — but faces major obstacles.

“Pacific Junction has never been flooded in their lifetime, ever, and now all of a sudden the rules that come down from the government say: ‘Well, you can’t rebuild there because now we know you’re in the flood zone,'” he said. “Well, they weren’t in a flood zone until the levees broke, so that’s frustrating for people, particularly if they’ve lived there all their lives.”

Governor Reynolds said state tax dollars have been spent on some projects, but there’s uncertainty about how much the State of Iowa may have to contribute to levee repair.

“It’s extremely frustrating. I’m very frustrated. The bureaucracy and the hoops that they expect you to jump through,” Reynolds said. “You make one small step forward and it’s four steps back.”

Reynolds told reporters her idea of flexibility is very different from the Army Corp’s. The governor said homeowners and businesses in the flood zone are in a “catch-22” situation because rebuilding can’t start until the levees are fixed.