You are here: Home / Sports / Panthers push Cyclones to 3 overtimes before falling 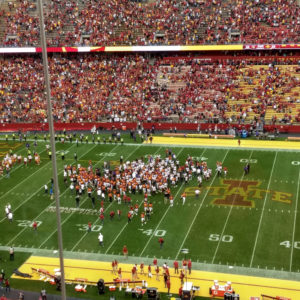 Cyclone and Panthers meet at the end of their 3 overtime game.

Iowa State survived the upset bid by Northern Iowa 29-26 in triple overtime Saturday in the season opener at Jack Trice Stadium in Ames.

Cyclone quarterback Brock Purdy saved the game by diving on a fumble at the goal line in the third overtime and running back Sheldon Croney then scored the winning touchdown one play later.

“UNI, hats off to them, they did a great job. You know I am proud of our guys, they played to the last whistle and we are going to get better from here,” Purdy said after the game.

Iowa State was the heavy favorite going in — but Purdy says it was better to be tested than to have a runaway game. “It was great to face that kind of adversity with a team, 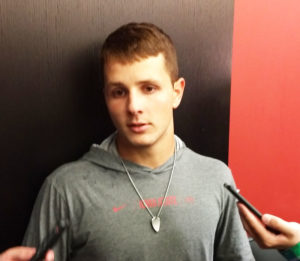 with an offense where we are still trying to find out identity…it was a good test for us,” Purdy says.

Purdy threw for 278 yards and two touchdowns in leading the Cyclones from behind to tie the game in the fourth quarter and then twice in the overtime periods. He says the win is something they can learn from.

“We showed that we’ve got heart an everything and that’s all that really matters, and we are going to build from here.   Obviously we can always build from every single game…I think it was a positive thing to see all our guys in it to the very end. I’m just so happy for our guys,” Purdy says.

UNI got a defensive touchdown on a fumble recovery that was upheld on review that gave them the lead late in the third quarter  Running back Trevor Allen says the defense kept them in the game.

He says they gave a good effort.”There’s negatives and positives from this game. My biggest story from this game is we don’t quit. We came down here to win,” Allen says.

UNI true freshman quarterback Will McElvain got his first college start in the game and made some big plays scrambling that kept them in the game. He says it was an exciting atmosphere and he just needed to settle in. McElvain says there were times when he tried too hard to make things happen and says part of that was being anxious about his first start. He threw for 228 yards and one touchdown.

Iowa State has the week off before they host Iowa on September 14th.  The Panthers host Southern Utah next Saturday.