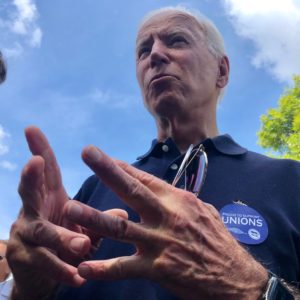 “The president has no intestinal fortitude to deal with this,” Biden said. “He knows better. Even his instinct was to say: ‘Yeah, we’re going to do something on background check.’ What’s he doing? Come on. This is disgraceful.”

Biden,  speaking with reporters during a campaign stop in Cedar Rapids, said Democrats need to “push and push” this as a key 2020 voting issue.

“We just have to beat them, flat out beat them,” Biden said. “Look, the polling data has never been more stark.”

Biden said the vast majority of Americans support measures like mandatory background checks for all gun purchases and “red flag” laws to take guns away from those deemed a threat to themselves or others. Biden also supports reviving the federal ban on the kind of rapid-fire weapons that were used in the three mass shootings in August. 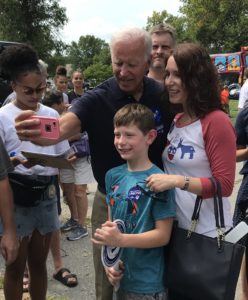 “The idea that we don’t have elimination of assault-type weapons, magazines that can hold multiple bullets in them is absolutely mindless,” Biden said. “It is no violation of the Second Amendment. It’s just a bow to the special interests of the gun manufacturers and the NRA. It’s got to stop.”

“It’s totally irrational and it’s all about special interests and it has to stop,” Biden said. “It has to stop.”