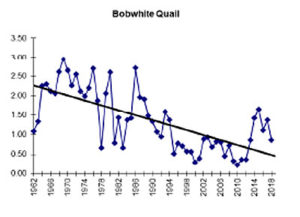 Iowa’s quail population took the biggest hit of any of the game birds from the tough winter conditions.

The annual roadside survey found their populations were down 36 percent from last year. DNR wildlife biologist Todd Bogenschutz says impact was greatest on quail because their range is only across the southern three tiers of counties.

“The got that kind of transition — the got freezing rain, they go sleet, ice several times — and that’s just brutal on quail. Because they are not big enough to get through it and they don’t venture as far as pheasants,” according to Bogenschtuz. “We kind of fully expected that they would take a hit. I was hoping maybe not as much as they did.”

He says the number of quail taken last year increased by 45% from the previous year. Bogenschutz says the harvest would have been much higher if more hunters had been out. “We had about 10,000 quail hunters last year and they shot about 50,000 quail — which was the highest we’d seen in more than a decade,” Bogenschutz says. “So quail numbers have been good the last four or five years just like pheasants — the highest we’ve seen since the late 90s.”

Bogenschutz projects the take would have been as high as a quarter million quail if the hunter numbers had been comparable to the 90’s. He says there were around 20,000 quail hunters back then, so there weren’t as many hunters chasing quail last year. Bogenschutz says hunter numbers for pheasant and quail had dropped off during the period when bad weather hurt their populations. And he says they are working to get younger hunters more involved in all types of hunting.