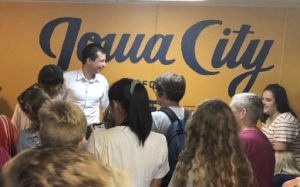 South Bend, Indiana Mayor Pete Buttigieg announced he’ll open 20 campaign offices in Iowa over the first 20 days of September and his paid staff in the state will swell to 100 by the end of this week.

“We want to continue to consolidate our position in the top tier and then work our plan to make it to the top of the heap,” Buttigieg said during a recent Radio Iowa interview.

Buttigieg and most of the candidates in the state yesterday stopped by the Hawkeye Labor Council picnic in Cedar Rapids, which attracted a crowd of hundreds.
Many got a glimpse of perceived front-runner Joe Biden and he posed for dozens of photos. Chris Tapken of Cedar Rapids explained to her young son that they took a photo with a former vice president — who she admires. 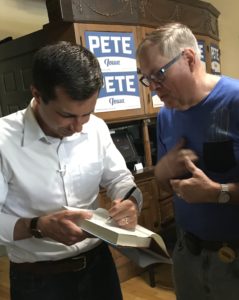 “I voted for Trump. I’m kind of for Trump, but I like him,” Tapken said of Biden, adding again for emphasis: “I like him.”

“Right now, I’m certainly leaning toward Biden,” King said. “I can’t imagine he will do anything that will turn me away from him, but I’d say we have so many candidates that we have to watch. I’m looking forward to this next debate and then I’ll make my final decision.”

Larry Nelson of Cedar Rapids hasn’t settled on a candidate. He’s looking for someone with “a bit of charisma.”

“More important than that, someone that will ultimately be electable,” Nelson said, “and I’m not sure what those qualities are at the moment.”

Nelson was in the crowd for a Buttigieg event on Monday morning. Neil Anderson of Cedar Rapids, a Biden delegate in 2008, also attended the discussion on climate change

“I saw Mayor Pete here in Cedar Rapids in like in about February and I have to say I was kind of skeptical from of his background., but I’m sold on him,” Anderson said. “He’s smart and he has practical solutions. He’s not too far left. He’s electable.”

Anderson’s wife, Dee Anderson, is still considering her voting options, but her “dream team” at this point would be Elizabeth Warren and Buttigieg. But if Biden’s the nominee, the couple said they’ll gladly support him.