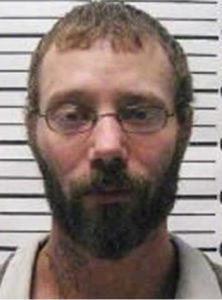 A New York man was arrested in southwest Iowa this weekend for the alleged kidnapping and assault of a woman he met on a dating site.

Thirty-two-year old James Scott Smith, Junior, of Mexico, New York, was being held in the Adair County Jail on $1,010,000 bond, on charges that include domestic assault with a weapon/first offense, harassment in the first degree,  first-degree kidnapping , and obstruction of emergency communication.

Authorities were notified at around 12:45 p.m. Saturday that Amber Leigh Garrison, of Smyrna, New York, was inside a Stuart convenience store. The woman claimed she had been assaulted and held by Smith in a semi-truck cab since approximately July 20th. She said he picked her up at a truck stop in Pennsylvania, after the two made contact on a dating site. The woman said once she got in the semi, she was not allowed to leave, use her cellphone or contact her family.

Saturday morning, Garrison called 911 and put the cellphone under the seat, so Smith wouldn’t know she was calling. After the third 911 call, Smith realized what was going on and terminated the call. He then allegedly held her in the cab against her will for about an hour, beat her and held a knife towards her. Garrison said Smith threatened to kill her and himself.

Due to the fact the female caller never spoke with Adair County dispatch, they were unable to get an exact location of where she was. A Stuart police officer met up with Garrison at the convenience store and Garrison identified the truck she had been held in. She said also that Smith let her go only after she promised him he wouldn’t call police.

The officer noted Garrison had visible injuries on numerous location of her upper body, including blood coming from her nose. She also complained about a possible infection caused by Smith allegedly having forced her to be tattooed. Smith said their relationship was consensual. Authorities say the case remains an open and ongoing investigation, which involves several alleged crimes in multiple states.