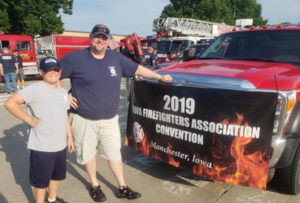 Firefighters from across the state have gathered in Manchester for their annual state convention, which started today. Manchester Fire Chief Mike Ryan says more than 2000 guests are in town.

“All in all, we’ve got a pretty busy week set up,” Ryan says.

There are golf and bowling tournaments and a program at the Delaware County fairgrounds tonight (Wednesday) featuring a Huey helicopter fly-in and a pilot who talks about what it was like to fly missions in Vietnam. Many of the events are private, but the public can watch the Iowa Firefighters Association drills in downtown Manchester on Friday.

“That’s the only day we plan on closing any streets,” Ryan says.

There will be a big parade on Saturday night in Manchester.

“The parade route is actually 2.3 miles, so there should be plenty of space for folks to come out and throw a lawn chair down, throw a blanket down and just enjoy some of the variety of fire aparatus that you will see,” Ryan says. “There are some really, really neat antique trucks that people bring for this.”

The Iowa Firefighters Association was organized in 1849. This is the group’s 141st annual state convention and the fourth time Manchester has hosted the event. According to federal records, Iowa has 732 fire departments — most of which are staffed with volunteers.