You are here: Home / News / Bennet says free preschool tuition should be higher priority for his party 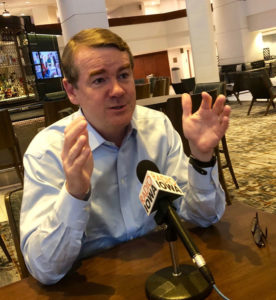 Democratic presidential candidate Michael Bennet went to a Des Moines preschool today to highlight his call for ensuring every three- and four-year-old in America can go to a public preschool.

“I realize that the reason why preschool kids don’t get the attention they deserve is that they don’t vote in elections, but it doesn’t make it any less important for us to do what we need to do here,” Bennet said.

Bennet proposes $1 in federal funding for every $3 a state puts toward universal preschool. Bennet says tuition-free preschool should be a higher priority for Democrats than free college. He is calling on Democrats to focus more on pre-K through 12 education.

“The best predictor of the quality of your education is your parent’s income and that’s not the way it’s supposed to work,” Bennet told Radio Iowa. “There was a time in American history in the 20th century when education was the wind at our back and It needs to be again in the 21st century.”

Bennet, a U.S. Senator from Colorado, is the former superintendent of Denver Public Schools, where 95-thousand students were enrolled. Bennet said there hasn’t been a question in any televised debate for 2016 or 2020 candidates about K-12
education — and he said that shows a mismatch from what kids and parents need “and what our politics is delivering.”