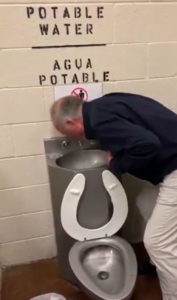 Iowa Congressman Steve King says he drank from a toilet tank at a migrant detention center recently to show the water was safe for drinking.

NBC News recorded King during a town hall Wednesday in Eagle Grove as he talked about touring detention facilities for asylum-seekers. “I actually went into that cell where it was reported they were advised they had to drink out of the toilet,” King said. “I took a drink out of there and it was actually pretty good, so I have a video tape and I smacked my lips.”

King told the crowd in Eagle Grove he hadn’t posted the video online, to help put complaints about conditions in the detention centers “in the rear view mirror.” But after NBC reporter Maura Barrett posted King’s comments online, King tweeted out the video.

King, according to the NBC News video, described the system this way to the Eagle Grove audience: “These toilets in these prisons are solid stainless steel. They’re built so that they are semi-indestructible by the inmates that are there and in the back, where the lid would be on our toilet, that’s also sealed and there’s a water fountain there and you push the button and the water comes out and you take a drink That’s how it is. It’s not drinking out of the toilet. It’s drinking out of the water fountain that’s integral with the back of the toilet.”

King said he believes a “language barrier” prevented those being held in the cells from understanding the words “potable water” printed on a sign above the tank. A  Democrat in congress who visited the detention centers criticized King. New York Congresswoman Alexandria Ocasio-Cortez said migrants told her the guards directed them to drink out of the toilet because the water fountain was broken.