You are here: Home / News / Pilot survives plane crash in cornfield near Greenfield 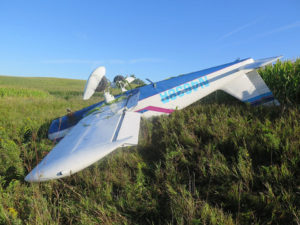 The pilot had minor injuries after the crash in Adair County.

The pilot of a single-engine airplane suffered what are believed to be minor injuries when his plane crashed into a cornfield Wednesday morning in southwest Iowa.

The Adair County Sheriff’s Office received a 911 call about the incident that took place at around 7 a.m. Wednesday. A man had walked to the caller’s residence to report the crash. Emergency crews responded to the scene, about one-mile northwest of Greenfield, and found the pilot, 59-year old Eric William Chrystal of Jefferson. His 1966 Piper Cherokee 140 had crashed into a corn field before flipping upside down.

Chrystal was taken to the hospital in Greenfield for treatment of his injuries and later released. The Adair County Sheriff’s Office was assisting the FAA and NTSB in their investigation into the cause of the crash.