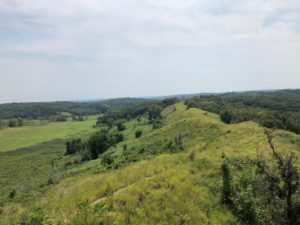 The Golden Hills Resource Conservation and Development group’s Lance Brisbois says it’s important to show off the area..
“The more people we have come visit and realize what we have, the more they’ll want to protect it. One of the projects that Golden Hills coordinates is the Loess Hills scenic byway and most people probably have no idea that we have a national byway in Iowa,” Brisbois says.

The tour is billed as a parks and peaks bicycle tour. It follows the Missouri River Valley from Lewis and Clark State Park in Monona County to Waubonsie State Park in southwest Iowa. The Loess Hills’ bluffs and ridges were formed by wind-deposited silt. It’s a landform unique to western Iowa and China and home to over half of Iowa’s remaining tallgrass prairie.

“A lot of people in Iowa don’t even realize they exist or don’t understand what they are, so we really want people to come and visit and explore and see what we have,” he says. Participants will pedal a little more than 150 miles during the ride.