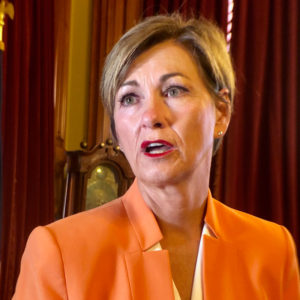 Governor Kim Reynolds says more than 30 people applied to be the new leader of the Iowa Department of Human Services — and a Texan “rose to the top.”

November 1st will be Kelly Kennedy Garcia’s first day as Iowa DHS director. She’s worked in the Texas Health and Human Services Commission since 2013 and is currently a top deputy in the agency.

“She’s in charge of about 700 employees, had a budget of about $1.4 billion, which is close to what we have in the State of Iowa,” Reynolds told reporters Thursday afternoon, “so she kind of brings a lot of experience to the table.”

Garcia also worked on a Texas commission that lists state agencies and programs for lawmakers to consider modifying or closing.

“She’s known for really her organizational skills, for looking for ways to bring efficiency to the department,” Reynolds said during a news conference in her statehouse office “She’s worked on policy, so she just hit on a lot of the areas that I think will be really advantageous for the department.”

Reynolds has said she wants the agency to move in a different direction.

“The agency’s not where we want it to be,” Reynolds said. “I think there’s things that we can do better.”

As for what those things may be, Reynolds told reporters she’s not going to “micromanage” Garcia or any of her agency leaders.

“You set the vision, the big picture, kind of what the goal is, you articulate that vision to very talented people that you bring on board,” Reynolds said, “that you believe can go out there and execute.”

Garcia must win a confirmation vote in the Iowa Senate next year to keep the job. Reynolds has approved a one-time, $50,000 signing bonus for Garcia. Garcia’s state salary will be about $154,000 — roughly $40,000 less than her Texas salary.

“So I think that…says a lot about her,” Reynolds told reporters. “She was really excited about coming…This is a great move for her. It’s a great opportunity for her to go to the next level.”

In late June, Governor Kim Reynolds’ chief of staff asked DHS director Jerry Foxhoven to resign. Foxhoven has filed a $2 million wrongful termination lawsuit against Reynolds, two of the governor’s aides and the State of Iowa.