You are here: Home / News / Wilburn sworn in, so Iowa House again has 100 members 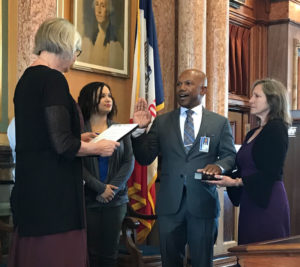 Ross Wilburn is sworn in.

A Democrat from Ames was sworn in as a new member of the Iowa House early this afternoon.

A state representative resigned this summer to take a seat on the Story County Board of Supervisors and Ross Wilburn won a special election in early August to fill the vacancy.

“I want thank you all so much for coming here today. I can’t help but think of the history…There are now five African Americans serving in the House,” Wilburn said.

Wilburn noted the first African American woman to serve in the Iowa House was elected in 1964 — the year he was born. Wilburn said the trip he took to Washington, D.C. about two decades ago marks a key turning point in his life.

“I was in front of the Lincoln Memorial, the spot that they have marked where Dr. King gave the ‘I Have a Dream’ speech and it was that moment that I decided that I was going to go ahead and make my first attempt, in 1995, to run for city council,” Wilburn said.

Wilburn lost his first two races, but wound up winning and serving a dozen years on the city council in Iowa City — including two terms as Iowa City’s mayor. He moved to Ames a few years ago to take a job with Iowa State University Extension. Wilburn — who is a University of Iowa graduate — was asked by a reporter about the upcoming Iowa-Iowa State football game.

“I know the folks in Ames will forgive me that as an Iowa grad, I cheer for the Hawks,” Wilburn said. “I cheer for the Cyclones except for one game of the year and we’ll let you guess which game that will be.”

Wilburn, a Davenport native, served six years in the Iowa National Guard after he graduated from high school. Wilburn replaces State Representative Lisa Heddens, who is also a Democrat, so the partisan make-up of the Iowa House has not changed.