You are here: Home / News / Sanders rallies on the campuses of Iowa’s public universities 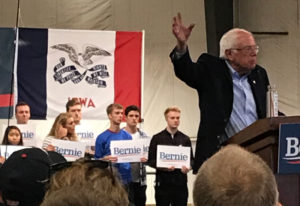 Vermont Senator Bernie Sanders is on a “tailgate tour” of Iowa’s three state universities, speaking to supporters who backed his 2016 bid for president as well as students who’ve just become old enough to vote in 2020.

Sanders spoke on the University of Iowa and Iowa State University campuses Sunday. He’ll be on UNI’s campus over the noon-hour Monday. During a speech in Ames, Sanders drew big cheers with his proposals to cancel college debt and make public colleges and universities tuition free.

“Your job is to work with me to make it happen sooner rather than later,” Sanders said.

“If Bernie gets elected, I’m hoping he can make college cheaper, then I don’t have to pay like $30,000 to come here,” Lopez said.

Sanders used a barnyard epithet as he told the students they must get involved in politics if they want problems solved.

“We have a president who believes that climate change is a hoax,” Sanders said. “Well, in my view, Donald Trump is a hoax.”

Most of the crowd’s largest cheers were for this and other Sanders’ swipes at Trump. Richard Phelps of Mingo supported Sanders in 2016 and will again in 2020.