You are here: Home / News / Sanford kicks off GOP challenge of Trump 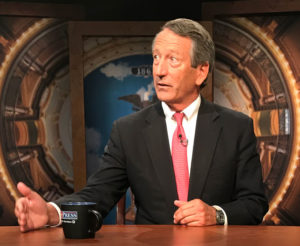 Former South Carolina Governor Mark Sanford announced today that he is challenging President Trump’s bid for reelection. Sanford said during a recent trip to Iowa that it’s time for a debate about what it means to be a Republican.

“As a Republican Party, we’ve lost some of our ways,” Sanford said.

Sanford questions Trump’s embrace of protectionism when it comes to trade and Sanford said Trump is leading the party to disregard scientific evidence that the climate is changing.

“As to my primary beef, I think it is, in fact, the degree to which he has called himself ‘The King of Debt’ and has led the party in the wrong direction on debt and spending,” Sanford said.

Sanford has been a long-time supporter of tougher immigration measures, including construction of a wall along the southern border and penalties against businesses who hire people who entered the country illegally. According to Sanford, Trump “is good at recognizing problems,” but tends to make situations worse.

“And I think there are real questions of tone and humility and adherence to truth that I think cause people to doubt what he says next,” Sanford said, “which then undermines our standing in the world and domestically.”