You are here: Home / News / Fans and foes of wind turbines turn out at public hearing in Winterset

People for and against wind turbines packed the meeting of the Madison County Supervisors.

More than 100 people attended today’s public hearing in Winterset over a county ordinance that would ban construction of wind turbines and solar panels for the next 27 months.

“Do not clap. Do not cheer. Do not make snide comments under your breath,” Price said. “We don’t need any of that.”

People from the Winterset area and others from as far away as Algona and Amana spoke. Some argued wind turbines are disturbing the landscape and causing rifts in families and among neighbors. Paul Ehm lives near Orient and he doesn’t like the noise or the flashing red lights on the five wind turbines operating nearby. 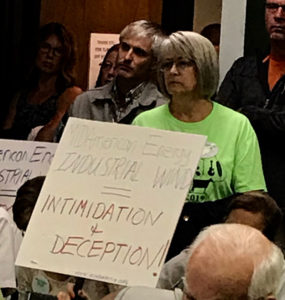 Ehm wasn’t the only person from neighboring Adair County to air grievances at the Madison County hearing. Jodie Hoadley of Orient, a member of the Adair County Board of Supervisors, said by the end of this year there will be over 500 turbines in her county.

“This has caused a lot of relationship issues in the county between family members, neighbors, people in town,” Hoadley said. “People don’t speak that have been friends for years, neighbors for years. It’s tore families apart.”

Steve Shelley of Stuart, who’s also an Adair County Supervisor, has one tower on his farm and another is being erected. He urged officials in Madison County to speed up the process of drafting zoning rules for turbines.

“The moratorium, I hate to see you string it out there,” Shelley said. “If you can’t get it done in six months, I don’t know when you’ll possibly get it done.”

Allen Lang of Winterset was among the first to speak, arguing it was time to “take a step back” from continued wind development. He said the economic gains from the turbines already in the county are coming at a cost.

Janalee Caviness of Adair County helps maintain a small group of wind turbines and she accused critics of new wind farms of having a “not in my backyard” mentality.

“Be fair about it and get real facts,” Caviness said to the Madison County Board of Supervisors. “Some of the stuff that’s out there is pretty wild.”

This was the first airing of the proposed Madison County moratorium and it could go into effect sometime in October. Residents near properties where permits for wind turbines have already been granted pleaded with Madison County officials to stop those projects as well as any new projects.