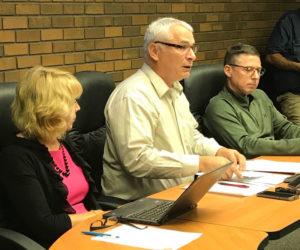 The Madison County Board of Supervisors has scaled back the duration of its proposed moratorium on new wind turbines. The board voted to end the moratorium on October 1st of next year, rather than on January 1, 2022.

Adam Jablonski MidAmerican Energy was among those who testified at a public hearing in Winterset yesterday. He called the 27-month-long moratorium “excessive.”

“MidAmerican would not be able to develop wind projects if people did not want them,” he said. “Wind turbines have been operating in Iowa for over 20 years and we still have people signing up for them — all voluntary and we would not be able to build any projects if the landowners in those areas we were looking for did not voluntarily sign up for wind projects, so just please consider them as you consider this moratorium.”

Others who testified at the hearing complained about the engine noise of the turbines. Bev Anderson of St. Charles raised concerns about the cropland that’s taken out of production by turbines in rural areas.

“This land is adding up to more and more acres,” Anderson said. “Farmers need that land to plant.”

Mary Jobst of Earlham circulated a petition in favor of the moratorium.

“I was stunned by the number of people who believe these turbines are too close and don’t want them and most willingly signed the petition,” Jobst said. “The majority of people living in the footprint of the proposed 52 turbines do not want them.”

That includes Jobst and her husband, who signed a lease to host a turbine and she asked the board of supervisors to put a halt to the wind farm project.

Bonnie Haugen of Winterset defended wind development. She told the supervisors her husband, father, brother-in-law and a cousin all have jobs in the wind industry.

“My nephew just took a job custom welding on turbines in Iowa,” Haugen said. “I just want to be the persona face of 10,000 rural Americans who are working in wind.”

More than 100 people attended yesterday’s public hearing in Winterset. Some who testified said the controversy over wind turbines has ended friendships and created rifts in families.