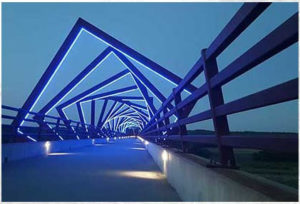 DOT spokesman Craig Markley says one project will help link up two trails. “It’s part of a multi-phase effort to complete what’s called the missing link between Woodward and Perry. Once you get the nine-mile connector done you are going to have an outstanding loop between the Raccoon River Valley Trail and the High Trestle Trail,” Markley says. The project was awarded $392,000.

A Hardin County trail project was awarded $375,000. “The trial is part of an abandoned railroad right-of-way that was purchased a number of years back,” Markley says. “And this project will provide a four-point-four mile paved section running from south of Steamboat to Edgington Avenue in Eldora. This will connect with the Eldora Trail which will then connect with the Pine Loop Trail. And actually this will create a very nice loop in Hardin County.”

The commission approved $530,000 to pave a gravel portion of a central Iowa trail. “This section would run from 560th Avenue near Huxley east to Cambridge and then skirt on the south side of Cambrige and connect with the South Skunk River Bridge, which was reconstructed a number of years back,” Markley explains. “The Heart of Iowa Nature Trail is a 23-mile trail that extends from Slater to Melbourne.”

A project to complete another phase of the Tatonka Ska Trace Rail Trail near the Iowa Great Lakes. “From Superior just to the northeast side of the lakes area cutting through Dickinson and Osceola County,” he says. The project was awarded $202,000. Markley says this trail has shown to be very popular.”They have seven trail counters on their system — and I think they are approaching 1,200 users a day. And this is the April to October time frame,” Markley says.

The money is appropriated by the Iowa Legislature and he says through the years it has helped finish or upgrade the trail systems throughout the state. “It’s really moved from kind of a shotgun blast approach where you’ve got a little small piece of trail here and a small piece there. To now you’ve really got some really great regional trail systems. You’ve got some great loop systems — like the Decorah loop — Fairfield loop,” Markley says.

He says the trail program had the $1.5 million allocated for this fiscal year and a little money left over from last year.