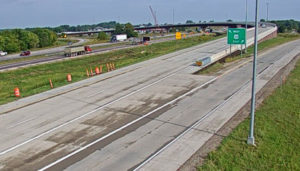 Flyover bridge as seen on the DOT traffic camera.

The long-delayed new flyover ramp at the intersection of Interstate 35 and Highway 30 on the edge of Ames finally opened today.

The DOT’s Jesse Tibodeau says construction started on the 23-million dollar project in December of 2016 and it was supposed to be done in two years. “In 2018 the contractor had some issues with the anchor bolt sleeves on the tops of the piers that connect the piers to the steel girders,” Tibodeau says. “But that’s all been addressed and the bridge is in great shape right now.”

The contractor had to pay to repair the mistakes made on the piers and the project completion was set back. The flyover replaces a clover leaf interchange that had traffic merging and exiting in the same area on I-35. Tibodeau says the new bridge will be safer.

“The clover leaf loop there was built 55 years ago or so — and it work well for a long time — but traffic is just too high in this area. So the flyover bridge will handle traffic for another 55 years here,” according to Tibodeau. The interchange sees some 7,000 cars a day and that increases when there are special events like football games in Ames. 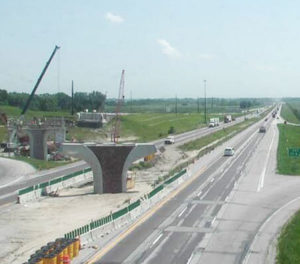 The bridge under construction last year.

“The bridge itself is two lanes, the exit is two lanes, so that will be kind of intuitive movement,” Tibodeau says. “The thing we would like folks to look our for — the merge instead of happening on I-35 will happen down on westbound 30 — so you’ll have traffic coming from Nevada and merging from the north with this new flyover ramp.”

Wet weather this week threatened to delay the opening again — but workers were able to get it ready and open to traffic.